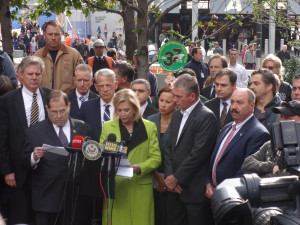 On Monday, November 2, 2015, Mike Barasch attended a press conference at Ground Zero to support Congressional Reps. Carolyn Maloney, Jerry Nadler, Frank Pallone, Nydia Velázquez, and Steve Israel, all who all criticized recent Republican proposals that would provide an underfunded and temporary extension of the James Zadroga Health and Compensation Act.  The new Republican proposal offers much less money for the Victim Compensation Fund (VCF) and it fails to fund the WTC Health Program which provides health care to 9/11 survivors.

Unless a permanent extension is approved by this Congress, the health program will begin to shut down next Spring and claimants will receive less than 50% of their VCF awards.  Steve Cassidy, President of the UFA, and Jake Lemonda, President of the UFOA, both spoke to the rowdy crowd of first responders and demanded that Congress “do the right thing” by permanently extending the Zadroga Act.