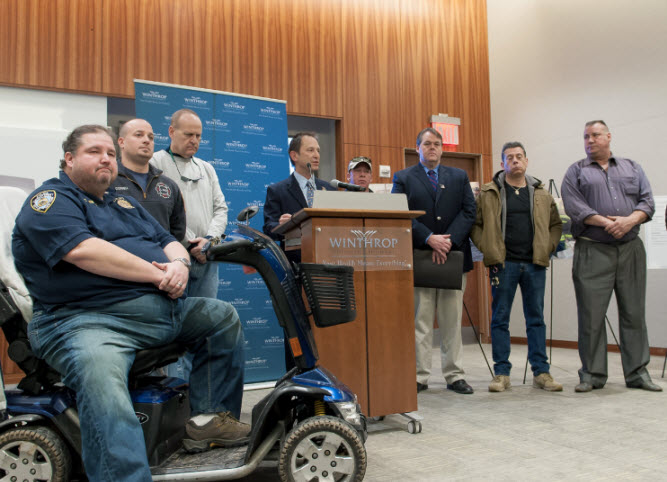 Michael Barasch was asked to speak at the press conference held at Winthrop Hospital Medical Center. Surrounded by several clients who were 9/11 first responders –who now suffer from neuropathy — as well as 9/11 activist John Feal of the Feal Good Foundation, Barasch spoke of the need to add neuropathy to the list of WTC-covered conditions. Here are his remarks:

“Good morning. My name is Michael Barasch from the law firm Barasch & McGarry. I am here today with Noah Kushlefsky of Kreindler & Kreindler. We are privileged to represent the family of NYPD Detective James Zadroga, as well as thousands of other first responders and local residents who have been diagnosed and certified with WTC 9/11 illnesses.

When Congress first passed the James Zadroga Health and Compensation Act of 2010, we were pleased that asthma and other respiratory illnesses would be covered –but we were disappointed that cancers were not included. Thankfully, Congress allowed additional new illnesses to be included if the medical community could show hard data that linked those illnesses to WTC toxic dust. In 2010, we didn’t have the statistical data. In 2012, I was asked to testify on behalf of our clients at a STAC committee meeting because at that point, we were representing hundreds of young first responders with cancer. We had a strong hunch that there was a link. Many medical studies were done, including one done by the FDNY. They showed that cancer among first responders was elevated 15-20%. As you all know, thanks to those studies and the data, NIOSH has now certified 67 cancers, linking the diseases to the WTC toxic dust.

I am speaking today because dozens of our clients, including Ken Anderson and Donald Miller, have been diagnosed with Neuropathy. Dr. Stecker and Dr. Wilkenfeld’s study has demonstrated that for those exposed to the toxic WTC dust there is a fifteen times increase for severe symptoms of Neuropathy. I hope that NIOSH does the right thing once again and agrees to certify this illness so that these men and women can receive the treatment that they need and the compensation that they deserve.

Read the full article that appeared in Newsday on Thursday, January 14, 2016.